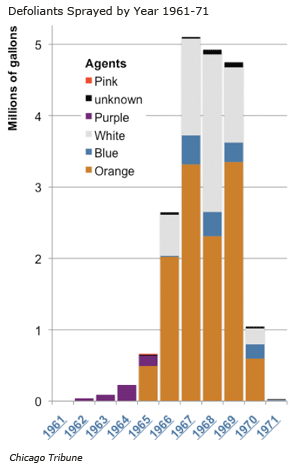 U.S. Air Force C-123s flew 20,000 missions that sprayed the herbicides, as part of the defoliation program code-named “Operation Hades,” later renamed “Operation Ranch Hand.” During the time of the war, dipterocarp forests, plantations, mangroves, brush lands, and other woody vegetation constituted about 25 million acres of dense tropical forests in South Vietnam, an area approximately the size of the state of Kentucky. The program’s official objective was to deploy tactical code-named “Rainbow herbicides” that could denude this tropical-agricultural landscape, which provided cover and subsistence for counterinsurgency forces.

Of the herbicides used in this U.S.-led ecocidal war were Agents Orange, Purple, Pink and Green, containing varying concentrations of the phenoxy chemical 2,4,5-T that was contaminated with Dioxin. The toxicity of Agent Orange, above the other herbicides, was attributed to its equal mixture of Dioxin-contaminated 2,4,5-T and another phenoxy chemical 2,4-D. Other herbicides included Agent White, a mixture of 2,4-D and picloram, and Agent Blue, an arsenical herbicide used against rice crops that consisted of sodium cacodylate and cadodylic acid. Much of the herbicides used during Operation Ranch Hand were up to 50 times the concentration recommended for killing plants.

Fitted with specially developed spray tanks with a capacity of 1,000 gallons of herbicides, C-123s were able to spray an 8.5-mile swath of land in less than five minutes. A smaller portion of the spraying efforts had also been conducted by on-ground combatants by hand and by way of trucks out of U.S. military installations by the U.S. Army Chemical Corps and other allied forces.

When U.S. President John F. Kennedy came into office in January 1961 the question of what to do with Vietnam was not yet answered. But by May of that same year—the Cold War inevitably becoming the lens through which U.S. foreign policy was interpreted—President Kennedy reached a decision on U.S. objectives in Vietnam. The U.S. would “prevent communist domination of South Vietnam,” a now-declassified White House memorandum read, “to create a viable and increasingly democratic society, and to initiate, on an accelerated basis, a series of mutually supporting actions of a military, political, economic, psychological, and covert character to achieve this objective.”

The U.S. shortly established the Combat Development and Test Center in Saigon, to identify new counterinsurgency techniques, along with the development of tactical weapons, against the North Vietnam Army and pro-Independence forces in the south. Among what was determined to be prime competitive advantages of the enemies was the cover of the thick jungle canopy that also provided subsistence living. Herbicides that were powerful enough to clear this tropical-agricultural landscape was quickly becoming appealing.

Within months, in August 1961, after the Dinoxil herbicide reached the shores of South Vietnam, defoliation testing began in Kontom Province. 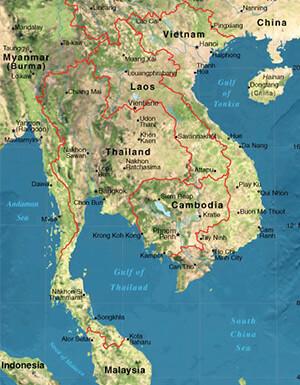 The defoliation program started out small and nearly ended before it began as the efficacy of herbicide spraying had been questioned by the Department of Defense, the State Department and the South Vietnamese government. Washington was also wary about a public backlash, both domestically and around the world, and that the program would be co-opted by the North Vietnamese as an anti-American propaganda tool. But President Kennedy was not swayed. The U.S. would remain on its path to “participate in a selective and carefully controlled joint program of defoliant operations in Vietnam starting with the clearance of key routes and proceed thereafter to food denial.”

Moreover, the official White House stance on the use of herbicides was that it did not violate “any rule of international law concerning the conduct of chemical warfare,” a precedent “established by the British during the emergency in Malaya.” It was also argued that the use of herbicides, which did not target human populations, was akin only to its agricultural use domestically. Little was known at the time about the byproduct of 2,3,7,8-Tetrachlorodibenzo-p-dioxin (TCDD), also known as Dioxin, that occurred during the accelerated industrial manufacturing of the herbicides and the extent of subsequent Dioxin contamination in the herbicides.

On January 13, 1962, the first official Operation Ranch Hand mission flew over National Route 15, which stretched from the port of Vũng Tàu to Bien Hoa Air Base. As the American involvement in Vietnam escalated, so too did the use of herbicides. Operation Ranch Hand in Vietnam expanded to include large areas of southeastern Laos, in December 1965, and reached its peak by 1967 when over 1.5 million acres were sprayed.

“If we think they’re winning, you can imagine what they think.”
– President Lyndon Johnson, in a telephone conversation with Senator Mike Mansfield, 1965

While opposition to the defoliation program existed from the very beginning, it did not grow in strength until 1967 when a petition was submitted to the White House by the Federation of American Scientists—with more than 5,000 signatures of renowned scientists, 17 Nobel Laureates and 129 members of the National Academy of Sciences. The U.S. scientific community continued to raise concerns about the ecological and human impacts of the herbicides and conducted field investigations in Vietnam under the auspices of the American Association for the Advancement of Science.

Even Senator Robert Kennedy famously warned: “At the end of it all, they may say, as Tacitus said of Rome: ‘They made a desert, and called it peace.’”

In 1969 a study found that Dioxin-contaminated 2,4,5-T was teratogenic, that is, at high does it caused birth defects in mice. A follow-up study a year later found what the chemical companies already knew, that the 2,4,5-T herbicidal component in the 12 million gallons of Agent Orange was contaminated with Dioxin. These findings led to the U.S. decision to restrict the use of Agent Orange altogether, though the U.S. EPA did not formally ban the use of 2,4,5-T until 1979. Later studies eventually found that Dioxin also caused adverse health effects and birth outcomes in humans. In 1997, the International Agency for Research on Cancer (IARC) of the World Health Organization, classified TCDD as a “known human carcinogen.”

The last defoliation mission using Agent Orange took place in April 1970. But its use for perimeter spraying of U.S. military bases continued for the next six months. The Air Force flew its last official crop spraying mission using Agent Blue on January 7, 1971. South Vietnamese forces continued spraying the remaining stocks of Agents Blue and White until 1972. 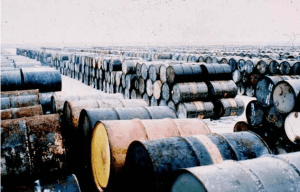 In September 1971, the surplus inventories of Agent Orange, including those under the control of the Armed Forces of South Vietnam, were re-barreled as part of the operation code-named “Pacer IVY,” at Da Nang, Bien Hoa and Tuy Hoa air bases. The barrels were then shipped to Johnston’s Island in the South Pacific until it could be determined how they would be disposed of. Meanwhile the 860,000 gallons of surplus Agent Orange in the U.S. were shipped to the Seabees base in Gulfport, Mississippi, where it was stored until 1977. Then, in that same year, about 2.3 million gallons of Agent Orange from Gulfport and Johnston Island were incinerated in the South Pacific Ocean on the Vulcanus, as part of “Operation Pacer Ho.”

“Operation Ranch Hand” became a footnote in most accounts of the war in Vietnam, but its widespread use of Agent Orange and other herbicides, its toxic legacies, are still felt today.

Inside the Barrels: Agent Orange, Blue and White

Video Map of Spraying of Herbicides 1963-70. Developed by Jeanne Stellman.