As early as 1943, the U.S. military, together with the University of Chicago, began studying various chemicals and their application to be used for vegetation control. Then in early 1945, the result of their research efforts, incipient mixtures of 2,4-D and 2,4,5-T, were first tested by the U.S. military in Florida at the Bushnell Army Airfield, against the tropical foliage and crops there, and additionally elsewhere over the years, in California, Indiana, Kentucky, Montana, North Dakota, New York and more.

Tactical herbicide formulations and spray equipment were developed consequently, by the U.S. Department of the Army Chemical Corps at Fort Detrick, MD, in anticipation of the intensifying war on the Korean peninsula.

Then by the early 1960s, the more developed formulations of 2,4,5-T and 2,4-D were being tested across the U.S. and around the world, in India, Thailand and Canada, among other countries. 2,4,5-T and 2,4-D were ultimately used for defoliation, while other organic arsenicals were used for crop destruction. Spray equipment had also been adapted to enable aerial spraying at controlled rates and concentrations.

Information about where herbicides were used, stored and tested is still incomplete. What is known is that herbicides were shipped to Vietnam from several U.S. ports, including Baltimore, Seattle and New Orleans, early on in the war; and from Mobile, Alabama and Outport of Gulfport, Mississippi, after 1966. Once they arrived at the Port of Saigon, they were stored at either the 20th ARVN Ordnance Depot in Saigon or the 511th ARVN Ordnance Depot at the Da Nang air base, until they were sent to their final destinations.

The VA has updated a list of these locations and more on their website in 2019. But while this updated list includes some new locations, it has left out sites that were on an earlier version.

Fort Detrick (previously Camp Detrick) was the headquarters for the Department of the Army’s Biological Laboratory which was responsible for the developing the technical aspects of the military defoliation program. Between 1946 and 1968 the military tested 2,4,5-T, 2,4-D, picloram, cacodylic acid and other herbicides to determine which combination or concentration would be most effective for tactical purposes against trees and crops.

The major center for U.S. testing of herbicides was the Eglin Air Force Base in Florida. Between 1961 and 1971, nearly 59,000 gallons of Agent Purple, Orange, White and Blue were sprayed there. Soil sampling at the test site conducted in 1970 until 1987 confirmed TCDD contamination. Because additional residual Dioxin had also been found at storage and loading sites west of the airstrop, mitigation efforts at the base began and concluded in 2001.

“They told us there wasn’t anything in it that could hurt us, they said it was just like the stuff you used on the farm.”
– DeFuniak Spring resident Miles “Peg” Nowling

Between December 1966 and October 1967, the U.S. military tested Agent Orange, Purple and Blue and other herbicides at the Canadian Gagetown military base, which has been used by the U.S. National Guard and Reserve forces for many decades. Since testing began, Canadian military and civilians have claimed to have suffered from Dioxin-related illnesses, and in 2007, the Canadian government announced a $95.6 million compensation package.

During the Korean War the U.S. considered using herbicides and reportedly shipped 5,000 gallons of Agent Purple and spray apparatus  to Guam in 1952 However, the herbicides were not used.  Procurement records show that 19,250 gallons of Agent Orange were shipped to Korea in March 1968 to be sprayed along the DMZ

The U.S. tested the use of herbicides at the Pranburi Military Reservation south of Bangkok in 1964. It also stored Agent Orange at the Udorn Airbase in northeast Thailand at various times between October 1968 and September 1969, where it was loaded onto airplanes for spray missions in northern Laos. In addition, the U.S. military used ‘non-tactical’ herbicides, including 2,4,5-T to spray the perimeters of numerous air bases in Thailand where U.S. forces were located.  U.S. veterans who believe their health conditions were caused by exposure to Agent Orange in Thailand are considered by the VA on a case-by-case basis and must prove they were exposed.

The U.S. has denied that herbicides were tested, stored or transported via Guam. Reports that the U.S. shipped 5,000 55-gallon barrels of Agent Purple to Guam in 1952 to be used during the Korean have been criticized. A 2018 GAO report examining the use of herbicides on Guam, however, found that use of Agent Orange on the island could neither be proved nor disproved.  Veterans who served on Guam have provided affidavits to the VA that they sprayed Agent Orange on the island and disposed of barrels in a landfill.  A handful of Guam Veterans have been able to prove to the VA that it was ‘as likely as not’ that they were exposed to Agent Orange on Guam and have received disability benefits.

Before their use in Vietnam during Operation Ranch Hand, herbicides were shipped out of Bayonne, NJ; Oakland, CA; New Orleans, LA; Baltimore, MD;  Seattle, WA; Mobile, AL; and Gulfport, MS. The chemical companies shipped the 55-gallon barrels of herbicides by rail to ports, whereupon they were transferred to pallets and then loaded onto cargo ships.

Starting in 1968, herbicides to be shipped to Vietnam were stored at the Seabees base in Gulfport, MS. During Hurricane Camille in 1969, 1,400 barrels of Agent Orange and Agent Blue were blown into the water; up to 240 barrels were never recovered.  After Operation Ranch Hand ended, the surplus inventories of herbicides remaining in the U.S. were shipped to the Seabees base and stored there until 1977. During this time, there was frequent leakage and spills; some of the barrels had deteriorated. In April 1977, 15,470 barrels (about 845,350 gallons) of herbicides were removed from their drums, transported and then loaded onto the M/T Vulcanus, an incinerator ship. Detectable levels of TCDD were found in the soil at the Seabees base. Between May 1987 until February 1989, the contaminated soil was removed and incinerated, and in 1991, the former storage area was layered over in order to reduce runoff of Dioxin. Further mitigation measures are still needed

Approximately 106,260 gallons of 2,4-D and 38,940 gallons of 2,4,5,-T were stored at Kelly Air Force base after use of Agent Orange ended in Vietnam. In 1972, it was transferred to the U.S. Department of Agriculture for brush control programs. In addition, the base stored 173,910 gallons of Agent Blue. Testing of the site in 1997 found Dioxin levels were within the range allowable in Texas. In 1997, the Air Force removed 3,000 cubic yards of topsoil from the former storage site that was contaminated with arsenic.

In April of 1972, a total of 25,220 drums of Agent Orange in Vietnam were shipped to Johnston Island in the South Pacific. They were stored there until they were emptied and loaded onto the M/T Vulcanus, and destroyed at sea in 1977. The soil on the storage site was treated using an on-site thermal desorption technology between June 2003 and March 2004. 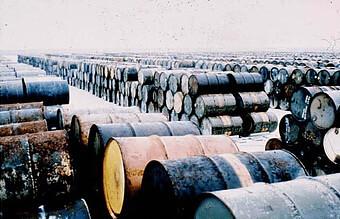