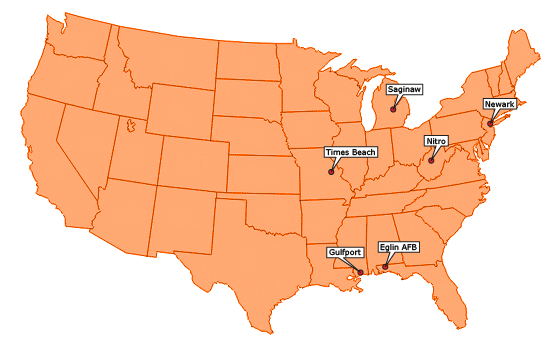 Agent Orange-Dioxin contaminated not only areas of South Vietnam, but also where the chemical was manufactured, stored, tested or disposed of, in the U.S. and elsewhere in the world.

The chemical components of Agent Orange, the phenoxy herbicides 2,4,5-T and 2,4-D, were made by 37 U.S. chemical companies, beginning in the late 1940s. Prior to and during the U.S. war in Viet Nam, these herbicides were used in industrial agriculture domestically. They were also sprayed along railroads and power lines, and more, to control undergrowth in U.S. American forests.

For the war effort, the U.S. military procured over 20 million gallons of Agent Orange, roughly a fifty-fifty mixture of 2,4-D and Dioxin-contaminated 2,4,5-T, from nine chemical companies:

Many of these former manufacturing sites, where Dioxin-contaminated 2,4,5-T was manufactured, are now EPA-designated Superfund sites and in various stages of containment, clean-up and remediation. For decades now, local communities near these sites have been battling the chemical companies, the EPA and the U.S. Army Corps of Engineers over the issue of Dioxin contamination.

In March 1949, a tank processing chemical formulations, including Dioxin-contaminated 2,4,5-T, exploded at the Monsanto Chemical plant in Nitro, WV. Days after the explosion, 226 workers became ill with severe cases of chloracne, which Monsanto insisted at the time was the only health effect of exposure to 2,4,5–T. Medical reports later released as part of a lawsuit against Monsanto stated that the explosion “caused a systemic intoxication in the workers involving most major organ systems.” These workers at the Monsanto plant were the first victims of Dioxin-contaminated 2,4,5-T. The chemical was manufactured at the plant until 1971. In 2012, a lawsuit against Monsanto by former chemical workers and residents of Nitro, was settled for more than $90 million. The settlement will be used for clean-up, remediation and health monitoring. 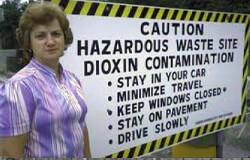 The community of Times Beach, MO, was devastated when Dioxin-contaminated oil waste, from Hoffman-Taff facilities in Verona, was spread on the town’s roads. Times Beach was evacuated in 1983. The homes were bought out by the EPA and the contaminated soil was removed and incinerated. In 1997, the town was converted into the Route 66 state park.

Up until 1969, Diamond Alkali/Diamond Shamrock produced Agent Orange at its factory in Newark, NJ, which was adjacent to the Passaic River. Testing of the site and surrounding sediment of the Passaic River and Newark bay, by the state of New Jersey and the EPA, in 1983, found high levels of TCDD. The soil in the factory’s area was capped in 2001, to prevent further leaching of Dioxin and other chemicals into the river. Though the whole lower river system and Bay is contaminated with Dioxin and other chemicals, the highest levels of TCDD found in the river are adjacent to the Diamond Alkali factory site in about 200,000 cubic yards of sediment. In 2012, 40,000 cubic yards of contaminated sediment were dredged and taken off-site. Work is still underway to address the full extent of contamination, which has also accumulated in the food chain, in the 17-mile stretch of Lower Passaic River and Newark Bay.

“The dioxin was in the dirt. I think maybe that was his exposure.”
– Saginaw resident Alice Buchalter, on her husband who died from gardening, Chicago Tribune, 2009. 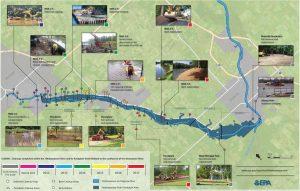 Dow Chemical produced Agent Orange at their Midland, MI, plant on the banks of the Tittabawasee River, from the 1950s until the late 1970s. In 1978, Dow posted advisories warning that fish in the river had high levels of Dioxin. It was not until 2003 that the EPA, the State of Michigan and Dow negotiated the clean-up of the extensive Dioxin contamination in Midland, along the Tittabawasee River and the Saginaw Bay area. Clean-up is still on-going and is focused on the removal of contaminated river bed sediment and river bank soils in a 21-mile stretch of the river’s floodplain downstream from the plant. Residential properties along the floodplain that have more than 250 ppt of Dioxin in their soils will have the contaminated soil removed and replaced with clean-soil and new vegetation. Dow faces extant lawsuits, including a recent case settled for $77 million for natural resource restoration of areas contaminated by the Dow plant. 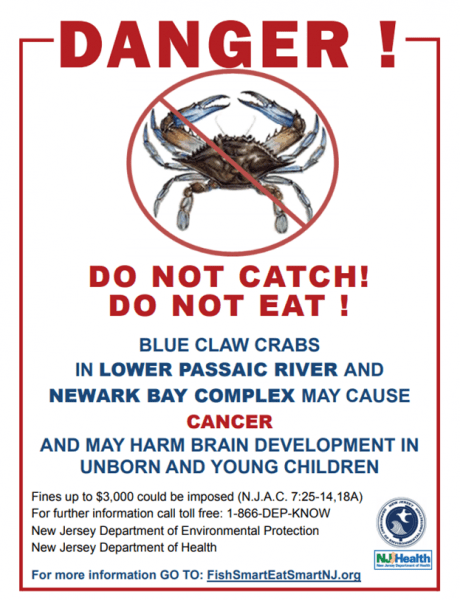