History of Agent Orange in Laos

The war in Vietnam extended into Cambodia and Laos. Agent Orange came with it.
Border of Laos and Vietnam in Salavan Province Laos (photo above) still showing signs of defoliation. Photo: S. Hammond

While almost all of the 20 million gallons of herbicides used during the War were sprayed in southern Vietnam, Cambodia and Laos were also sprayed. However, very little is known about the present day impacts on the people or the environment of these two countries. The War Legacies Project is currently conducting a survey to determine the extent of the environmental and human health impacts of Agent Orange/Dioxin in southern Laos.

Flight records show that there were spray missions flown in Laos on 209 dates between 1965 and 1970, with a total of at least 537,495 gallons sprayed. The heaviest spraying was in the first half of 1966 and continued at a steady rate until February 1967, after which spraying was intermittent until its end in October 1970. Most of the spray runs were coordinated out of Bien Hoa airbase as part of the Ranch Hand Operation, with some also run out of Ton San Nhat and Da Nang.

The areas most frequently sprayed were in Savannakhet, Salavan, Sekong and Attapeu provinces along where the Ho Chi Minh Trail (National Geographic Society map, right) entered Laos from the DMZ area of Vietnam. Parts of Khammouane and Champasak provinces were also sprayed.

Unfortunately, very little is known about spraying that was done by hand or helicopter and whether or not the CIA conducted any spraying in Laos. Especially in the central region of Laos where there was a small program of spraying by an Air America plane in 1968. There were also documentation of missions that
​
As in Vietnam, Agent Orange was sprayed not only to defoliate the countryside, but also to destroy crops. Records from Military Assistance Command Vietnam (MACV) show that 64 crop destruction missions took place between September 1966 and September 1969, over a total of 20,485 acres.

The spraying and bombing forced villagers along the Ho Chi Minh to flee to the hills for up to ten years. As a result villages that had sufficient food before the war faced loss of crops and livestock causing malnutrition that lasted for decades after the war.

According to William Buckingham’s history of Operation Ranch Hand, up until September 1969, the US Air Force sprayed 419,850 gallons over 163,066 acres of Laos. However, it is not certain if some of these acres were sprayed more than once. 75% of the herbicides sprayed were Agent Orange, followed by Agent Blue (15%) and White (10%).

Like the bombing of Laos during the war, the use of herbicides in Laos was kept “secret.” It was not revealed until 1982, when Buckingham’s draft of “Operation Ranch Hand Study” was made public in response to the Freedom of Information Act.

The complete story of the use of herbicides during the war in Laos has still not surfaced. 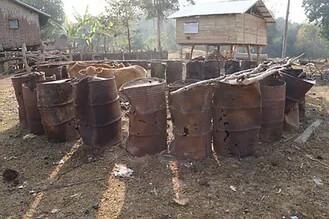 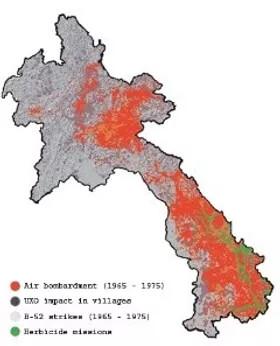 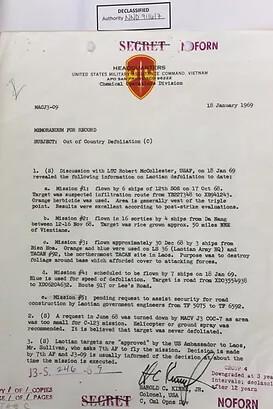